A rating system based on land not buildings

The existing tax system can encourage the under use, or non-use, of land since there are no financial penalties for doing so. If a site is valued at its current use (e.g. a car park), rather than its optimum use (e.g. housing), there are no incentives to bring it forward for more productive uses. A Land Value Tax (LVT) could stimulate economic activity as it provides an incentive to use land in a more productive way.

With a LVT, landowners would pay in full for the economic advantage that accrues from occupying relatively valuable sites. It would therefore encourage the transfer of land from those who have passively held it, anticipating uplift in value, to those who actively intend to put it to good use. A LVT thus discourages land speculation and land hoarding or banking which is unproductive, generates blight, and creates no employment or tax revenues.

3  Reflects the cost of public investment in infrastructure

4  Guards against unsustainable increases in the value of land

A recurrent property tax that is proportional to the value of land and property (i.e. LVT) will, over time, act as a stabiliser for land prices. This is because rising prices of, for example, housing, does not reflect a rise in value of the house itself (which tends over time to depreciate) but a rise in the value of the site (the land) upon which the house sits. 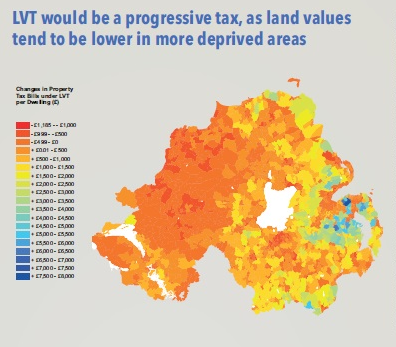