Lisa McElherron, Head of Public Affairs at NICVA, spoke from NICVA’s perspective welcoming the new approach government was taking this time and the data driven foundations on which it was based.

Celine McStravick – What is Outcomes Based Accountability?

Celine has been working closely with the Executive Office for the last five years on the adoption of the Outcomes Based Accountability approach and in the development of the Draft Programme for Government. Celine talked delegates through some of the key aspects of the OBA approach which included demonstrating impact; focusing government on outcomes as opposed to Ministerial objectives; the evidence foundation that the approach is built on; and how discipline plays a key role. The approach is based on techniques set out by Mark Friedman in his book ‘Trying Hard isn’t Good Enough’ which describes a range of practical techniques supporting an increased outcomes focus in public policy. 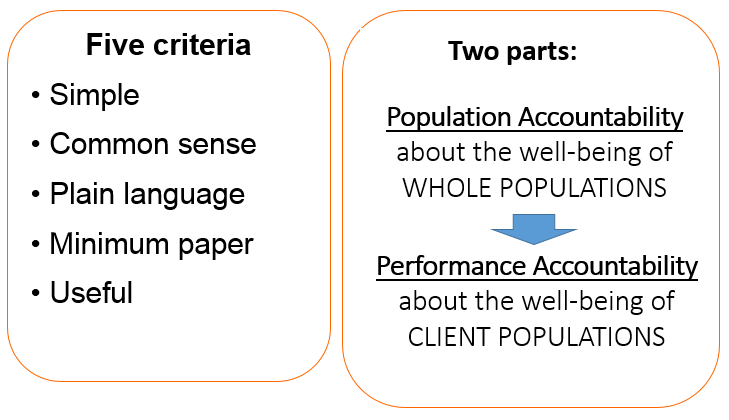 Celine challenged the narrative that OBA was a new approach as many politicians are claiming. The OBA approach had been adopted by many voluntary and community sector organisations such as Extern for a number of years and had also been practised by some statutory bodies including the Public Health Agency (PHA), the Trusts, and the Early Intervention Transformation Programme. 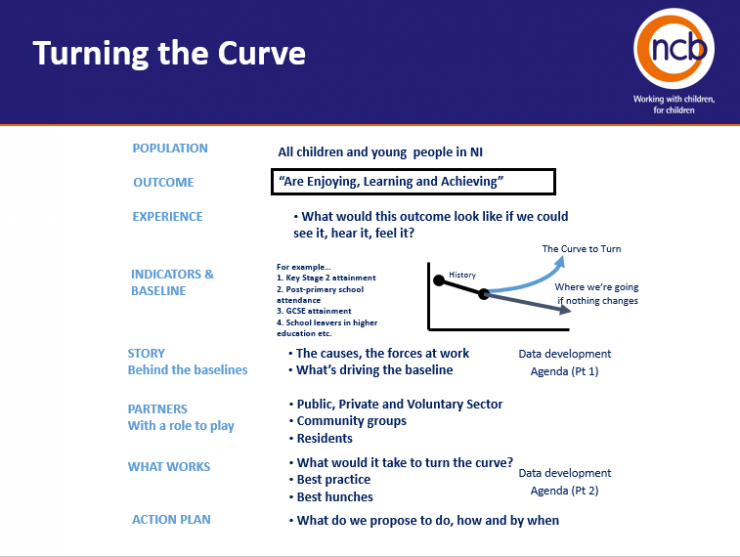 Celine provided delegates with some examples of where OBA had been adopted throughout the world. This included the New Zealand Government’s Procurement policy encouraging all sectors to work more collaboratively; Vermont’s Outcome Bill which was signed into law in June 2014; and the US Federal Program the Promise Neighbourhoods Initiative.

Joe opened his presentation with a clarification that this was a draft document which was open to change pending the responses to the consultation and that it was a framework yet to be completed. Joe also stated that although this was a Programme for Government for the next five years, the Executive were in recognition that this would be the first step but this was a long term approach.

Joe laid out the context of the Framework and stated that it had been developed on the foundations of the Stormont House and Fresh Start Agreements. The Stormont House Agreement had started the process of departmental restructuring and the civil service voluntary redundancy package, and there was an increased recognition of the need for change and more collaborative working.

The last Programme for Government had been comprehensive but had not included any measurement of impact. Government had sought to rectify that to ensure interventions were working and having a positive impact on the lives of Northern Ireland citizens.

The Programme for Government Framework structure is composed of: 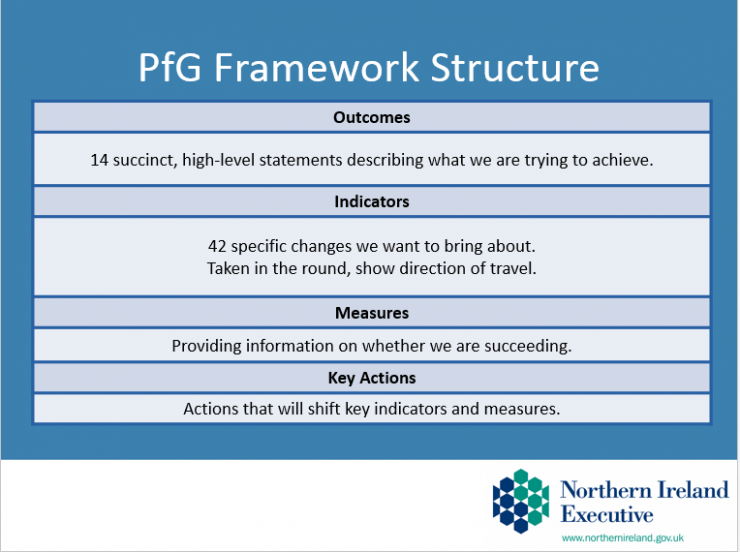 Joe stated that there are around 12-22 indicators that correspond to each outcome and each indicator applies to at least two outcomes. In relation to the measures provided, there are nine that are not yet collected or are not yet designed. 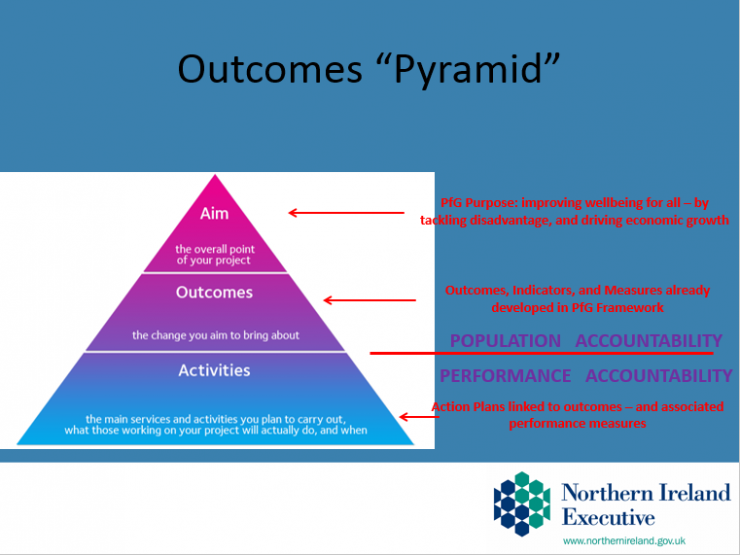 Joe stated that there would be a Senior Responsible Officer at Deputy Secretary level that would be accountable for each of the indicators. Joe continually made it clear that there was an appetite for collaboration and SRO’s were aware that they could not do it alone.

During the discussion period, delegates raised questions about the lack of targets and whether we could truly judge whether government was making an improvement through their interventions without them. There were claims that the draft framework was not ambitious enough and with only a pledge to ‘move the curve’ in the right direction, how could government be held to account on the pace of change?

Some argued that the outcomes weren’t outcomes at all and were a series of aspirational statements. Although Joe had mentioned that there were 12-22 indicators that matched anyone outcome, it would have been helpful to see the diagram Joe referenced that linked the indicators to the corresponding outcome. There were suggestions that some of the outcomes that were similar in nature could be merged to simplify that layer.

The indicators were argued to be at first glance all-encompassing but once the corresponding measure was taken into account, the scope was quite narrow. Some organisations that were there argued that as some of the indicators were quite specific and prioritised certain issues, there should be a more comprehensive list of indicators.

Delegates stated that having a single measure for each indicator could potentially create problems and the measures were very narrow in focus. There were concerns that that datasets that had been collected for a number of years and were reliable were being side-lined in policy development as they weren’t included in the measurement list.

Many agreed that the process going forward needs to be clearer and more information provided on what the action plans could or would look like.

The eleven statements that were fed back from tables were: 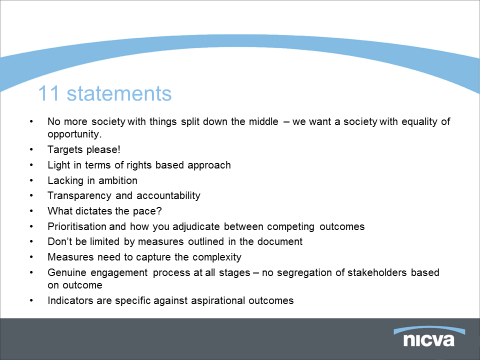 The Draft Programme for Government Framework is currently out for consultation in The Executive Office and is closing on 22nd July. You can access the consultation document here.

For more information on the Outcomes Based Accountability approach, NCB have published a guide on their website.