The aim of the draft plans is to help simplify the way in which complaints are dealt with by public bodies in Northern Ireland. NICVA recently invited the Northern Ireland Public Services Ombudsman Margaret Kelly, and her team, to an online event where they provided an overview of the role of NIPSO as well as insight into the current consultation.

The Ombudsman’s office is essentially about ensuring fairness. NIPSO can provide fairness and redress to the public who feel that a public service they have received was not at the standard it should be.

NIPSO investigate and resolve complaints about public services that have been brought to them by an individual or by an advocate, such as an MLA or Advice Service. The investigations are free and do not impose a financial cost on the complainant. All investigations are impartial.

Recent research carried out by NIPSO as part of their consultation on Complaints Standards found that only about 1/3 of people who are dissatisfied with a public service will make a complaint. Moreover, of that 1/3 only approx. ¼ feel their complaint has been resolved. The research found that most people who didn’t complain decided against it as they felt it wouldn’t make a difference, however some also noted other reasons such as lack of understanding of the complaints process and language or technological barriers. These reasons demonstrate why making a complaint to a public body does not work as effectively as it should.

NIPSO are also available to enable public bodies to understand how they can use their own complaints service to improve their own services. NIPSO address individual complaints as well as systemic ones, and this in turn can help Public Bodies utilise the information they receive through their complaints system to make their service better.

Areas of complaint you can raise with NIPSO

You can raise a complaint with NIPSO about the vast majority of Public Services in Northern Ireland. 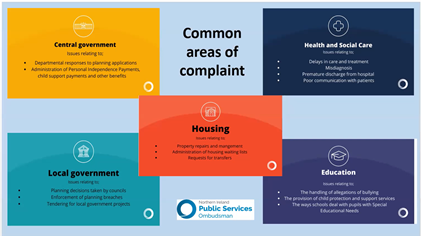 The Power of ‘Own Initiative’

As of May 2021, NIPSO have the power of ‘Own Initiative’. This means that when they believe there is reasonable suspicion of service failure they can carry out an investigation, often without having received a complaint from an external source.

In order to detemrine an area for an Own Initiative investigation, NIPSO use the cirteria below:

NIPSO’s Own Initiative investigation into PIP found systemic maladministration in how the Personal Independence Payment service was delivered to members of the public. The investigation found that the Department for Communities and Capita failed to properly obtain and use all relevant medical information to help them assess claims for the Personal Independence Payment (PIP) benefit. NIPSO are currently working with the DfC to help put in place the recommendations from the report.

NIPSO also carry out Overview Reports, Themed Reports, Strategic Inquiries, and release statements all of which detail areas where assessments have been carried out or trends have been found.

The Ombudsman’s legal authority to investigate complaints and make recommendations, as appropriate, is set out in the Public Services Ombudsman Act (Northern Ireland) 2016 (the 2016 Act).

On 24th May 2021, Part 3 (other than section 34) of the Public Services Ombudsman Act (Northern Ireland) 2016 came into effect enabling the Ombudsman to have the ability to change how all public bodies handle complaints.

Following on from this legislative change, NIPSO are now consulting on draft proposals that aim to simplify the way in which all public bodies deal with complaints.

The consultation document proposes that public bodies have a very clear and standardised approach to dealing with complaints.

These principles state that public bodies should:

Under each of these six areas, NIPSO further outline key things they expect to see from public bodies when they receive a complaint.

The proposals also detail a draft Model Complaints Handling Procedure (MCHP) which is underpinned by the Statement of Principles above. The draft MCHP explains in more detail how public bodies should deal with complaints.

The overarching aim is to develop and implement Model Complaints Handling Procedures for each public service sector therefore the MCHPs will act as a starting point for the discussions. NIPSO’s suggested approach involves stakeholder and partnership working, the establishment of formal complaints handling networks with identified sectors, a staged implementation approach across the five main sectors, training and best practice, and compliance.

The draft complaints handling process proposes a two stage complaints process. The first stage of the process would be short and focused on early resolution while the second stage, if required, will be longer and provide the public body with the opportunity to carry out a more in-depth investigation. When these two stages have been carried out, it should be made clear to the complainant that if they remain dissatisfied with the outcome, they can the approach NIPSO with their case.

NIPSO recognise that the current public body complaints procedure changes depending on the organisation and sector that you wish to complain about. In some cases, a complainant may have to go through up to five or more stages which can take up to three years on some occasions. It is recognised that this structure is unsustainable and does not help the case of the complainant.

The aim of a well-structured complaints process is not only in the best interests of the complainant but also of the public body. NIPSO want public services to see the value in their complaints systems. Part of the MCHP will have a requirement on public bodies to gather information about complaints that will then in turn allow them to identify trends i.e. Who is complaining? Theme/ Area of complaint? Is there a specific trend that could highlight a certain problem within their service? Complaints can be an early indicator of a bigger problem for public bodies therefore it is important these early warnings are dealt with appropriately.

To respond to this consultation or for more information, you can visit Complaints handling consultation - Office of the Northern Ireland Ombudsman or email [email protected] to receive a printed copy of the consultation response form.

The consultation will run until 30th September 2021.