The global "dash from cash" means that we need to enable our supporters to make frictionless, non-cash payments if we truly want to keep pace with them.  For this to happen, we need to increase our knowledge of the potential options, skill up in using them and invest hard-won funds in new technology. A good starting point for those of us not familiar with digital wallets, bitcoin or the newest crypto currency, is to look at "cashless giving" in the simple form of contactless credit or debit card donations and contactless mobile donations

To help charities adapt to evolving consumer behaviours, Barclaycard led a trial of 100 portable donation boxes, the first in the market to accept both Chip and PIN and contactless donations including those made by wearable and mobile devices.

11 national charities, including NSPCC, Oxfam and RNLI, kicked off the trial in September 2016, using the lightweight, portable payment boxes in a number of different ways according to their fundraising needs – from volunteers roaming with boxes at special events to placing them next to the checkouts in charity stores.

Although only a short trial, the charities took more than £20,000 in donations – including one for £1,000 given to the NSPCC.  They also reported positive responses from the public around the ease and flexibility the boxes introduced for donors.

However, not all respondents found these particular boxes were as effective as they would have liked, with some reporting that the technology was constantly breaking and was not entirely fit for purpose.  Other issues were that the appearance of the boxes was “clunky”, with the added problem that it looked so similar to a collection box that people kept trying to put money in it!

Discussing contactless payment systems without jargon is difficult, and if purchasing any, you will need to be familiar with a few key terms which are below –

Payments/donations are made by tapping a smartphone onto an NFC chip incorporated into either a payment terminal or an object, or by using the smartphone camera to scan an image (usually a QR code).

NFC is communication between two NFC-equipped devices which takes place when they are within about 4 cm of each other. Smartphones with NFC can make contactless mobile payments via contactless payment terminals (e.g. Apple Pay and Android Pay) and interact with cards or 'tags’ (where the phone acts as a reader), allowing an NFC-equipped smartphone to be tapped against the interaction point to trigger an action on the phone (e.g. bring up a payment screen).

This is a payment terminal that can take card payments via Chip & Pin (where users enter a PIN number) or a contactless bank card, or via a smartphone that is equipped with NFC and a digital wallet.

This allows Smartphone cameras to scan barcodes/QR codes, and capture images. QR codes are slightly more cumbersome because they require an app to interpret them, although popular apps such as Google Chrome and Twitter provide in-built QR code scanning capability for both Apple and Android devices.

What technology is available?

For those ready to move forward, there are many sources for contactless donation hardware and software, including some extremely low cost offerings.  Although not endorsing either, I have chosen just two potential providers to showcase the breadth of products available to suit all sizes of organisation and all fundraising environments.

Goodbox provides a range of contactless payment solutions, including – 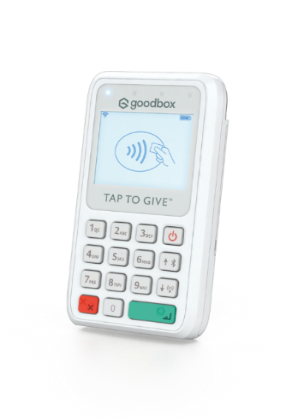 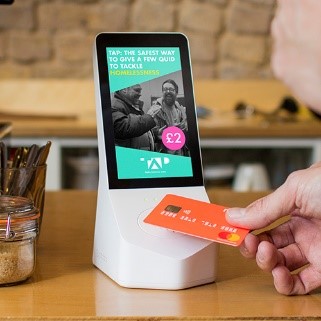 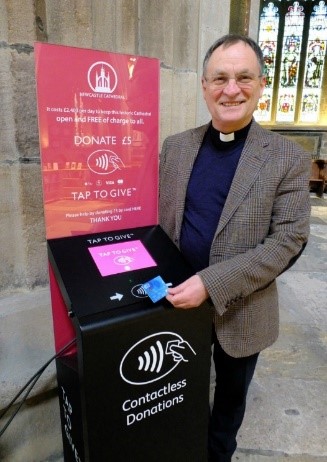 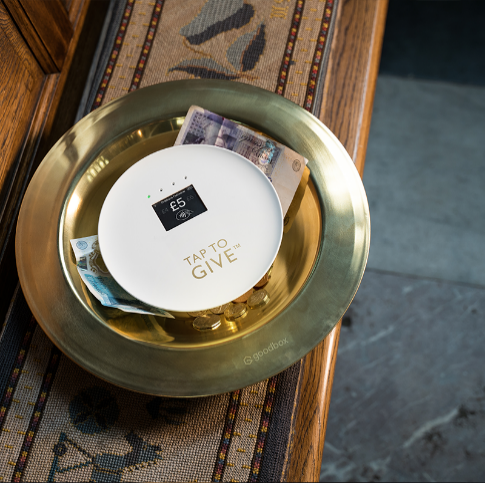 Good Thyngs provides an alternative to contactless card terminals to take contactless mobile payments without a large upfront investment. It also allows the charity to collect Gift Aid declarations and contact details, engage donors with additional information about how their money will be spent, and see who is giving, where, and when – in real time.

They offer special stickers that can be applied to any passive object, including existing cash collecting boxes, tins and buckets , signage, shop windows, and ID badges.  These objects are then transformed into secure contactless mobile donation points that never need emptying.  Ready-to-use collecting boxes with the technology already included are also available.

Supporters then simply tap or scan the object with their own smartphone to donate (using Apple Pay, Android Pay, or a credit/debit card), volunteer, or get more information. Their donation – often less a small transaction fee and the normal card charges – gets transferred straight to the charity’s bank account, with Gift Aid reclaimed from HMRC as part of the normal annual submission. 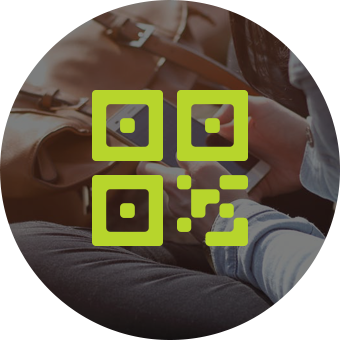 QR scanning functionality is built in to smartphone cameras, apps including Chrome, Pinterest, and Twitter, and our free Tap & Scan NFC app and SDK 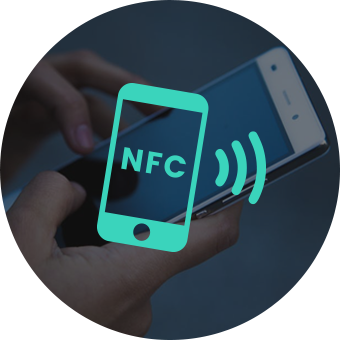 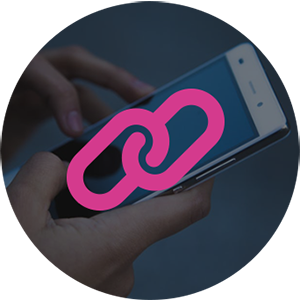 For a fully universal solution, they provide short URLs for the small number of users with no NFC, QR or Bluetooth capability.

What would work best for your organisation right now?

Contactless card donations are quick and easy for the millions of us already used to tapping our credit or debit cards on a payment terminal in shops.  However, the drawback is that they have a higher upfront cost.

Contactless card systems generally support both credit/debit cards and card-based digital wallet systems such as Apple Pay, Android Pay, and Samsung Pay using the same terminal. However, the higher cost per unit means they may be better suited to low volume situations where a staff member or volunteer is in attendance, such as at an event.

As well as having less upfront cost than contactless card donation systems, they tend to offer more flexibility, as the action of tapping or scanning the mobile device can trigger additional actions, such as making Gift Aid declarations, requesting contact details, and providing more information about the charity.  Contactless mobile donations can therefore be taken relatively inexpensively, and can be used in both low and high volumes, in both attended and unattended situations.

In the future, charities may possibly use both: contactless card systems in low volumes for specific events and campaigns; and contactless mobile systems in high volumes embedded across all their day-to-day donor touchpoints.

However, contactless mobile donations might work well for charities wanting to begin with a lower cost method for taking contactless payments.  This might also enable them to better demonstrate the value of cashless giving to Boards, staff and supporters, with the possibility of moving onto contactless card payments at a later date.

And a Final Caveat whichever system/s you use…

“Interest in contactless card usage is highest among Millennials but real usage is most differentiated by social grade. 15% more AB respondents use contactless cards than DE. Reasons for not adopting new payment technology were mostly linked to unfamiliarity, followed by security fears. For the 65+, not owning technology such as smartphones is also a barrier and brands will have to ensure that they do not alienate consumers in an effort to be more efficient.”

20 things to consider when choosing and using contactless payment technology

With grateful thanks for contributions from Kevin McCaughan (Advantage Solutions), Heather Miller, (Community Fundraiser, Marie Curie) and Denny Elliott, (Redsocks Consulting) for all their contributions.