Under the current system of taxation, charges are levied on land, and the improvements - typically buildings – on the land together, with no distinction made between the two.

Under a system of Land Value Tax, the charges would be levied on the land only, with improvements subject to zero or minimal taxation. If introduced it could mean that land bought by developers but not developed, and agricultural land could be taxed for the first time.

The report argues that this would shift the burden of real estate taxation towards less productive activities, particularly speculation on land, which is a major source of property bubbles.  The report also found that LVT would be a progressive tax, with the most deprived paying least.

Seamus McAleavey, chief executive of NICVA said, “In 2008 Northern Ireland experienced a severe property crash. The extreme rise in house prices which preceded the crash was, at the time, broadly welcomed as a sign of growing prosperity. But it is now clear that while some vested interests benefited, the property bubble caused significant social and economic damage.

“Avoiding a re-emergence of a real estate bubble should be an economic priority for government. This report proposes a solution. It explains how a Land Value Tax could operate in Northern Ireland to prevent speculation on land - a major cause of real estate bubbles. Significantly, because it involves reforming the rates system, this is a solution within the power of Northern Ireland’s Assembly and District Councils.

“House prices in Northern Ireland are on the rise again. As before, this has been widely welcomed as an indication of economic progress. It is important to ensure that any price rises are a sustainable result of real economic growth, rather than speculation. In this context, this report is crucial reading.”

At the launch of the report, its authors Ronan Lyons and Andy Wightman highlighted the potential for land value tax to reduce the likelihood of future housing market bubbles. "Property bubbles cause immense social and economic damage in the medium and long term and inflated property values merely increase indebtedness and reduce economic output," they said. "Well-designed land and property taxes can play a significant role in making land affordable and promoting economic growth.

"Northern Ireland is well-placed to be innovative in the way it develops land and property taxes. Although we do not recommend a system of Land Value Taxation be introduced in the immediate future, we are firmly of the view that such a fiscal reform is both feasible and desirable. Our report provides recommendations on how this can be done." 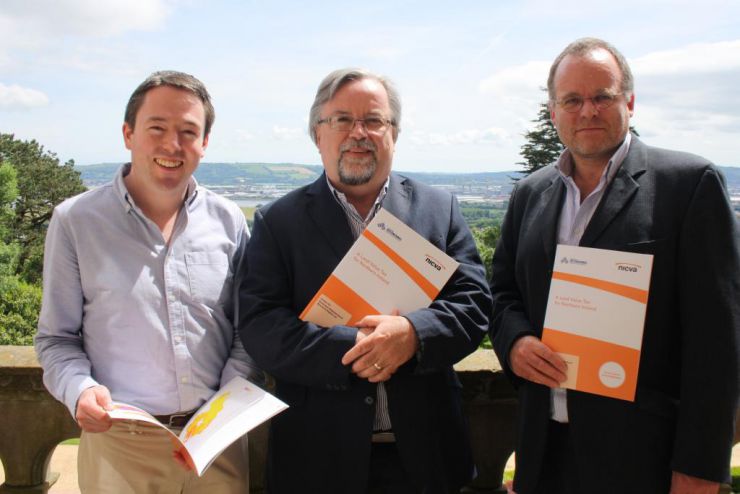 In order to introduce a system of LVT, valuations would have to be split into the land component and the building component. This would involve adapting the current system rather than introducing a new system.

LVT also requires comprehensive information on land ownership. The main task here would be to identify the owners of the 19% of homes that are currently in the private rented sector. In addition, a means of assessing the highest and best use of land is required as this is the basis upon which LVT is levied. This requires a more robust and transparent system of land use planning than is currently in place.

70% of land in Northern Ireland is agricultural. Agricultural land has been exempt from rating since 1929, creating a greater burden on other properties. Agricultural land should be incrementally brought into the net of a well-designed property tax system.

People who have low incomes and modest homes should continue to receive rates relief, as currently applied. A deferment scheme could be set up for people with low incomes but with expensive properties, whereby rates could be rolled over and paid when the property is sold.