The Budget Process and the 2016 Programme for Government

This was following the ‘Preparing for the 2016 Programme for Government’ conference we held in September 2015 which focused on the context and addressed issues of governance in NI.

At this information session, Seamus McAleavey Chief Executive of NICVA, laid out the context for the Programme for Government from the Voluntary, Community and Social Enterprise sector’s perspective.

Joanne McBurney, Head of the Central Expenditure Division in the Department of Finance and Personnel, provided a presentation on the public expenditure position, what the Budget 2016 – 17 entailed, the next Budget in the context of the Fresh Start Agreement and what the next Budget process will look like.

Detailing the economic context, Joanne drew on figures published by the Office of Budgetary Responsibility which showed that the UK had expanded by 2.2% in 2015. The OBR estimated that the UK economy will grow by a further 2.0% in 2016 which was down from the previous estimate of 2.4%. Focusing specifically on Northern Ireland, the region’s labour market continues to improve overall and over the last quarter, the employment rate increased to 69% which was the highest since February – April 2007. The region’s economy was set to grow in 2016 by 1.6%.

The region like many of our western counterparts, faced demographic pressures which will place further strain on key public services. In the decade 2015- 2025, DFP expect the Northern Ireland population to grow by around 91,999 people which represents an increase of 5%. However, the 65+ age group is expected to increase by 27% during this decade (275,000 in 2015 to 349,000) which will place a considerable strain on our health service.

NICVA’s Centre for Economic Empowerment published a report on the Fiscal Implications of an Ageing Population which details the economic impact of our changing demographic landscape.

In order to inform this debate, NICVA’s Centre for Economic Empowerment held a seminar focused on revenue raising options open to the region which heard from leading Economists and individuals from the VCSE, private and public sectors.

The Northern Ireland Budget is comprised of allocations from the UK Spending Review, Funding Mechanism (the Barnett Formula allocations – a proportionate amount of money provided to Northern Ireland based on comparable programmes) and NI Control Totals (the revenue generated through the regional rate). It is important to note that the Executive is not obligated to spend the money allocated on the basis of the Barnett Consequential in the same areas, in other words it is unhypothecated. The Executive is free to spend the money as it wishes. For more information on how NI is funded, see the ‘Statement of funding policy: funding the Scottish Parliament, National Assembly for Wales and the Northern Ireland Assembly.’

In spite of strong UK GDP growth forecasts over the next five years, the UK Government is continuing its policy of driving down deficit and debt. Public service spending continues and will continue to be tightly constrained. The Autumn Spending Review set the budgets for Whitehall departments up to 2019-20 for Resource DEL and 2020-21 for Capital DEL. Whitehall departmental spending will fall but will reduce at less than half the rate of the previous five years.

Northern Ireland receives a total of £20.6 billion from HMT (2016-17). 45% is Annually Managed Expenditure (AME) which is made of benefits (62%), pensions (27%), student loans (2%) and other items (9%). The other 55% is Departmental Expenditure Limits (DEL) which are firm multi-year limits set in the UK Spending Review which the Executive decides how to spend. 93% of the Executive’s total DEL funding comes from the UK Government and 5% is comprised of the Regional Rate revenue raised by DFP.

The outcome of the Spending Review for Northern Ireland represented a real terms reduction of 4.5% in resource DEL and a 12.9% increase in capital DEL in real terms by 2019-20.

Northern Ireland have introduced a number of ‘Super- Parity’ policies. In 2014-15 these cost:

Funding and priorities set out in the Fresh Start Agreement:

In addition, the Executive will set aside funding for welfare reform mitigation measures. How this money is spent is on the basis of Evason Report, a piece of work led by Public Administration Professor Eileen Evason.

It was agreed by the Executive that there would be no reductions in Health and Social Care spending and reductions to the PSNI budget were limited to 2%. Other departments were tasked within finding 5.7% budget reductions.

There were additional allocations made available for Health (£133m), Education (£40m), Legal Aid (£15m), Roads Structural Maintenance (£20m) and Skills (£5m plus commitment to £20 m in year). Details of budget allocations are provided in the PowerPoint presentation.

Ministers have additional flexibility to realign departmental budgets in June Monitoring. There have been Executive pre commitments made to skills and education and there are also a number of emerging pressures. There is £30million available as a result of money set aside to mitigate against the tax credit reduction which George Osborne reversed. There is also any carry forward from 2015-16 under Budget Exchange Scheme. This is a carry forward of underspends of up to 0.6% Resource DEL (£59m) and 1.5% Capital DEL (£9.6m).

Joe again stated the Executive’s commitment to adopting a more outcomes-based approach for the Programme for Government and recognised that many in the sector had been calling for this approach. Joe then outlined the consultation to date that the Division had carried out with individuals and civil society. The department had commissioned an Omnibus Survey through NISRA which had asked people to name their three biggest issues. Health had dominated alongside finances/cost of living. Family, education, employment, crime justice and safety had also featured consistently across the sample.

Joe outlined the challenging social context in which the Programme for Government was operating. Joe drew on the life expectancy metro map that the Department for Health, Social Services and Public Safety had developed to highlight health inequalities. This map showed that those in more deprived areas live much shorter lives than those from less deprived areas. Within a 5 mile radius, there was a difference in 9 years for males and 6 years for females. Joe then drew on a school performance: deprivation and religion gradient illustration developed by the Department of Education. This was based on the School Leavers’ Survey 2013 – 2014 and showed that whilst 76% of Catholic girls not in receipt of free school meals were achieving at least 5 A* - C GCSEs, only 22.1% of Protestant boys in receipt of free school meals were achieving the same. This disadvantage carried throughout education to further education. After highlight key inequalities, Joe discussed the recognition for more sustainable development and planning for an ageing population.

The draft Programme for Government Framework had been finalised in consultation with the current five Executive parties, focus groups, NISRA surveys, expert stakeholders and advisory Non Departmental Public Bodies (NDPBs), representative organisations of section 75 groups, senior civil servants across departments, arm’s length bodies and delivery partners, community and voluntary sector and trade unions. This framework would be debated for two weeks following the outcome of the election but before the departments had been assigned. 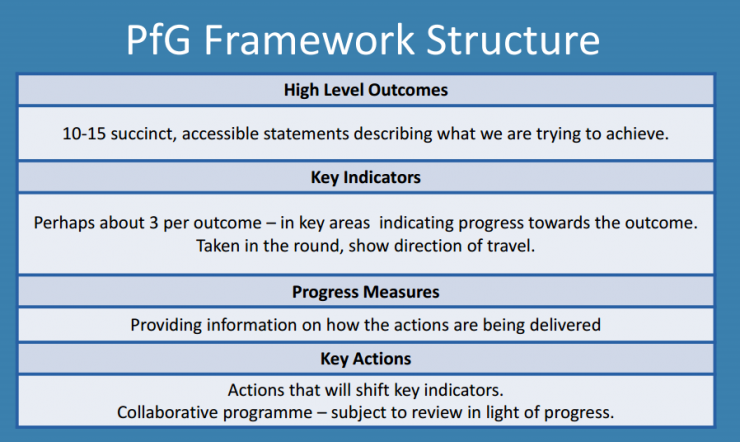 Timeline for the Programme for Government

Joe told attendees that there will be two consultation periods; the first for the draft framework and the second for the action plans. With each consultation, there will also be an Assembly debate where there will be an opportunity for the smaller parties and independent representatives to have their say. Joe added that the Programme for Government team in OFMdFM will also hold the Executive to account on the delivery of the outcomes. Malcolm McKibben, Head of the NICS, will also the SRO (Senior Responsible Owner) of the Programme for Government as a whole.

Joe encouraged all to have a look at the Scottish model as that is what the Executive had emulated. Joe also reminded attendees that the challenge for government was to see this as a 10-20 year plan and a long term thinking was of paramount importance.

Scotland National Performance Framework (NPF): outlines the government’s purpose which is to focus government and public services on creating a more successful country, with opportunities for all of Scotland to flourish, through increasing sustainable economic growth. It also includes Scotland’s 16 national outcomes.

Scotland Performs website: Scotland Performs measures and reports on progress of government in Scotland. It allows you to judge for yourself how Scotland is doing against a wide range of indicators set out in the National Performance Framework (NPF).