Below is a selection of the top 10 results from the survey.

1. On average, £140.71 was donated to charity per person in Northern Ireland during the past 12 months. This marked an increase in charitable giving on the figure reported in 2021 which was £135.78 per person

4. Almost half of respondents (45%) reported that they intend to donate money/gift to charity in the next 12 months

6. Cash remains the most popular method of donating to charity, with the Individual Giving Survey 2022 revealing that 61% of donors used this method. As illustrated in Figure 1, cash donations have been decreasing within the past couple of years with the exception of the small increase (4%) seen in 2022 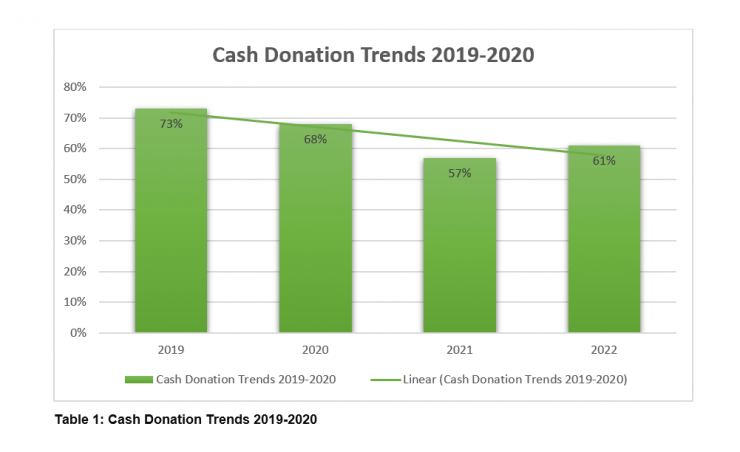 7. Of those who donated digitally in the Individual Giving Survey 2022, almost half (45%) of respondents donated to charity using PayPal. This marks an increase in the number of respondents who donated via PayPal (37%) in the previous survey

8. Online giving platforms (34%) e.g., JustGiving, GoFundMe were the second most utilised method of donating digitally. This shows a slight increase from the figure cited in the Individual Giving Survey 2021 whereby 32% of respondents used this method. Donating via direct debit (32%) was the third most used method, marking a decrease from the figure (43%) reported in the 2021 survey and continuing a steep downward trend since 2019 (Figure 2) 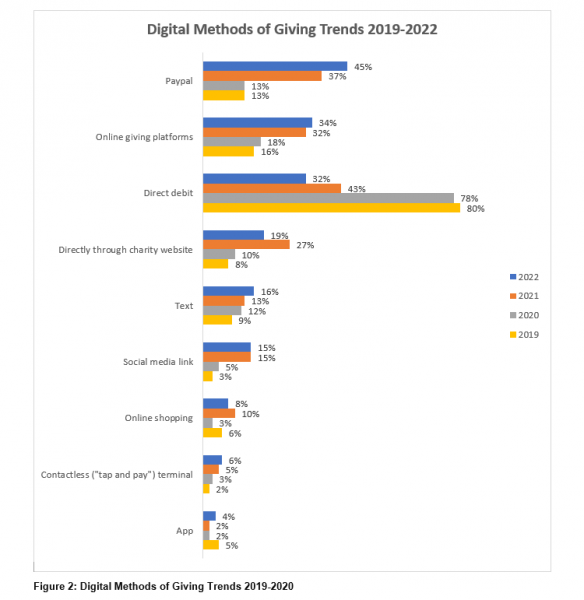 10. Of those who did not donate via digital means in the Individual Giving Survey 2022 barriers cited included that it was easier to give cash when asked (62%), cyber security concerns (34%) and a lack of understanding of how it works (9%)