The survey found that donations from people aged 16-24 increased from an average of £3.60 in 2011 to £8.68 in 2013, possibly due to increased donations via mobile phones and social media.

Lisa McElherron, head of public affairs at NICVA said, “It is good to see that despite the economic downturn people are continuing to give to charity. The increase in donations from young people is particularly interesting and we are going to do some more research into this to help fundraisers in the sector make the most from new technology in raising money.”

The most generous area in Northern Ireland is County Down, with an average donation of £23.89; however this is a drop from 2013, when the average donation was £32.76. There were also drops in donations from Greater Belfast and Derry, however the amount given in Co Armagh, Co Antrim, Counties Tyrone and Fermanagh and Belfast City increased.

There has also been a small drop in ‘gifts in kind’, for example donations of clothes to charity shops. Lisa McElherron commented, “This is probably a reflection of our more thrifty culture, people are wearing things for longer or giving them to family, rather than giving to a charity shop.”

Sandara Kelso-Robb, Strategic Advisor, from Giving Northern Ireland said, “This gives us a great snapshot of the state of charitable giving in Northern Ireland. People here are known for their generosity and even when times are difficult they continue to give what they can. It’s important for people to be aware that now, more than ever, charities need support and every pound can make an impac

This is the first stage in this research which specifically examined who donates to charity, how much they donate and where they donate from. The next stage will take place in February 2014 and will examine a number of areas such as what organisations people donate to and how they donate. NICVA would welcome any suggestions with regard to what else should be included in this research and we are keen to hear about other research into giving in the sector. 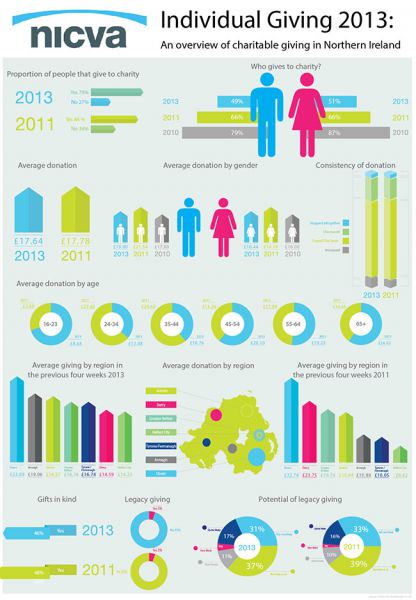 The key findings of the report are atached.