Northern Ireland’s fiscal deficit or ‘subvention’ – the gap between the taxation raised in the region and its public expenditure – is often cited as an indicator of the region’s economic (under)performance.

The DFP report acknowledges that many items which make up public expenditure and revenue are estimates and are “subject to some statistical uncertainty”. This article explains some of the issues involved in apportioning public spending and revenue to Northern Ireland.

Spending which the government believes “has been incurred for the benefit of individuals, enterprises or communities within particular regions” is known as ‘identifiable’ expenditure.[2] In the 2011/12 DFP publication: Northern Ireland Net Fiscal Balance Report this totals £19.6bn (85.5% of Northern Ireland’s total expenditure). Spending is identifiable if it is possible to ascertain:

The £17.0bn spent by the Executive and local councils in 2011-12 is clearly for the economic and social benefit of the people of Northern Ireland, and can unproblematically be categorised as identifiable.

The difficulty of apportioning spending by UK Departments to regions is highlighted by the example of the Imperial War Museum and British Museum, both based in in London.

Approximately £2m of £300m is attributed annually to Northern Ireland for these museums; the rest is attributed to other UK regions.[4] Treasury guidance states that the “who benefits” principle should be used wherever possible in public spending accounts.[5] Clearly these Museums will attract visitors (i.e. beneficiaries) from Northern Ireland and on this basis it is reasonable to apportion some of the expenditure to the region (perhaps on the basis of which region visitors to the museum originate from). However, the “where benefits” principle also seems relevant, as the spending of museum staff, suppliers and visitors is likely to be concentrated in London. Unfortunately, the document does not explain how Northern Ireland’s share is calculated, and more transparency would be welcome. There also appears to be an inconsistency in that the Department of Culture Arts and Leisure (DCAL) spending on museums in Northern Ireland is fully attributed to the region, regardless of whether visitors hail from other parts of the UK.

Public expenditure which is “deemed to be incurred on behalf of the United Kingdom as a whole” and is not regarded as benefitting any particular region is known as ‘non identifiable expenditure’.[6] This includes spending on defence and security services, foreign affairs, economic affairs, the Home Office, general public services and public debt interest payments.

Distinguishing between identifiable and non-identifiable expenditure can be problematic. For example, just over half (51%) of the £6.4 billion spend on the London Olympics (between 2008 and 2013) was recorded as non-identifiable, with the remaining 49% attributed to the London region.[8] But it could be argued that London’s share should be higher, given that the region overwhelmingly benefitted from that spending as much of it was related to infrastructure and tourism. Indeed in contrast to the London Olympics, public expenditure on the Glasgow 2014 Commonwealth Games was 100% attributed to the Scotland region.[9]

Another issue is that much of the non-identifiable spending is made through UK government departments that have headquarters, and the majority of their staff, centred in London. Therefore, due to this convention of distributing non-identifiable spending by population or GVA, the salaries of the departmental staff working in Whitehall are deemed to benefit Northern Ireland as well as the south-east of England. 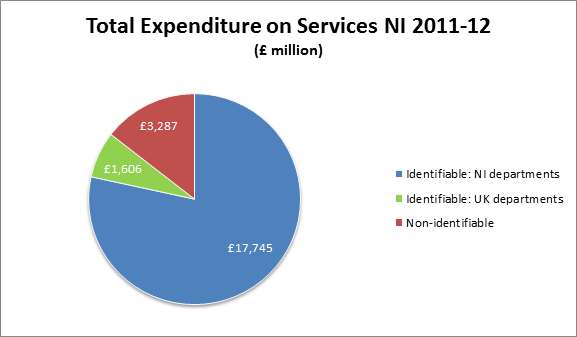 While these issues may seem trivial, the handling of non-identifiable spending has a significant impact on the size of the fiscal deficit. According to DFP, excluding non-identifiable expenditure from the net fiscal balance position means that:

Measuring Northern Ireland’s share of revenue raised for the UK Exchequer (in the form of taxes and duties) also faces difficulties. The postcodes of individuals and firms are used to accurately apportion revenue from Inheritance Tax and locally-raised property rates on a regional basis. However, estimates are used to calculate the regional contribution from other taxes. Different methodologies are used for different taxes.[10]

For example, Capital Gains Tax is allocated based on NI’s (estimated) share of UK GVA and dividing the total UK Capital Gains revenue by this percentage – not by totalling actual tax receipts from Northern Ireland.[11] Therefore, some caution should be exercised when reporting Northern Ireland’s tax revenues.

Recently, HMRC ran its own experimental analysis of the revenue raised from England and each of the devolved administrations using a different methodology from the Net Fiscal Balance Report.[12] For instance, survey data on regional levels of consumption was applied to the UK total level of VAT revenue to disaggregate the totals.

DFP compared to its own figures, and found that the variation between the two methods of estimation showed up most of all in the results of the estimated revenue generated from VAT receipts, Stamp Duty, the Aggregates Levy and Corporation Tax, where smaller estimates had been calculated by the HMRC methodology. As with the expenditure side of the equation, this shows that the method of estimating revenues has an impact on the size of Northern Ireland’s fiscal deficit, and urges caution in relying too heavily on the estimations.

Using the alternative figures from the HMRC report, DFP calculate that the fiscal deficit in Northern Ireland would have increased from £9.6bn to £10.5bn in 2011-12, a difference of 9.5%.[13]

Country and Regional Analysis (CRA) guidance: the Treasury provides guidance for UK departments, their agencies and other public bodies on how to allocate spending by region for the CRA exercise as part of the PESA output. https://www.gov.uk/government/publications/country-and-regional-analysis-guidance-2013

Government Expenditure and Revenue Scotland (GERS) is compiled by statisticians and economists in the Office of the Chief Economic Adviser of the Scottish Government. The primary objective is to estimate a set of public sector accounts for Scotland through detailed analysis of official UK and Scottish Government finance statistics. Unlike the DFP Net Fiscal Balance Report, GERS is designated as National Statistics as it meets the rigorous methodological requirements set by the UK Statistics Authority, in line with the Code of Practice for Official Statistics.

Treasury Statement of Funding Policy: Sets out the policies and procedures, which underpin the exercise of setting the budgets of the devolved administrations, and informs how the funding process operates.

[1] GVA is the difference between the goods and services produced in a region and their cost. It is commonly used as a measure of regional economic performance.

[4] Email from Treasury to NICVA. Note that this figure excludes £100m to “outside UK” beneficiaries.

[10] A full list of the methodology used is available in Annex B of the Net Fiscal Balance Report.

[11] Capital Gains Tax is due when the owner disposes of an asset, such as shares or property. There are a number of factors that would affect Capital Gains Tax receipts regardless of NI’s share of GVA, such as rates of asset ownership, the tax liability of assets and annual tax-free allowances.

[12] HMRC (2013) A Disaggregation of HMRC tax receipts between England, Wales, Scotland and Northern Ireland. HMRC warns that as the methods are still at the experimental stage they should be treated with caution (page 5). Accompanying statistics tables and methodological notes are available at: https://www.gov.uk/government/publications/disaggregation-of-hmrc-tax-receipts. Notably, the report indicates that, since 1999, Northern Ireland’s per capita contribution to public revenues has grown most rapidly.