The Financial Benefits of the Supporting People Programme in Northern Ireland

This report estimates the costs that would be incurred if the Supporting People programme were to cease.

Launched across the UK in 2003, the Supporting People (SP) programme helps vulnerable individuals and families to live independently. Client groups that benefit include homeless people, people with long-term support needs, such as learning, physical or sensory disabilities and older people who require support to live in their own home, or need a particular type of supported housing. As of 31 March 2014, the cost of providing the SP programme in Northern Ireland amounted to £65.6m per annum. This funded over 19,000 “annual household units” of support.

The primary aim of the project is to estimate the financial benefits associated with SP in Northern Ireland. Sitra has used a financial modelling tool developed by Capgemini on behalf of the Communities and Local Government department in England to assess the impact of the removal of the programme on public finances and service users. The Capgemini model compares the full costs of delivering the SP programme currently with the costs incurred in the absence of SP.

In order to achieve this, the cost of providing SP itself is added to the cost of providing the other services that SP clients require in order to construct a “baseline” figure. The estimated cost of alternative services and dealing with adverse events that would be more likely to happen in the absence of SP constitute the “counterfactual” scenario. The baseline and counterfactual figures are then compared in order to calculate a net benefit of SP programme provision.

The model utilises both empirical data and estimates, made on the basis of judgements by SP experts. In applying the model to Northern Ireland, Sitra validated the assumptions and data: for example, the estimated costs of alternative services. If no Northern Ireland data was available, applicable or likely to make a material difference, guideline figures based on the Capgemini model were used.

The table below shows the differences between the baseline and counterfactual scenarios: 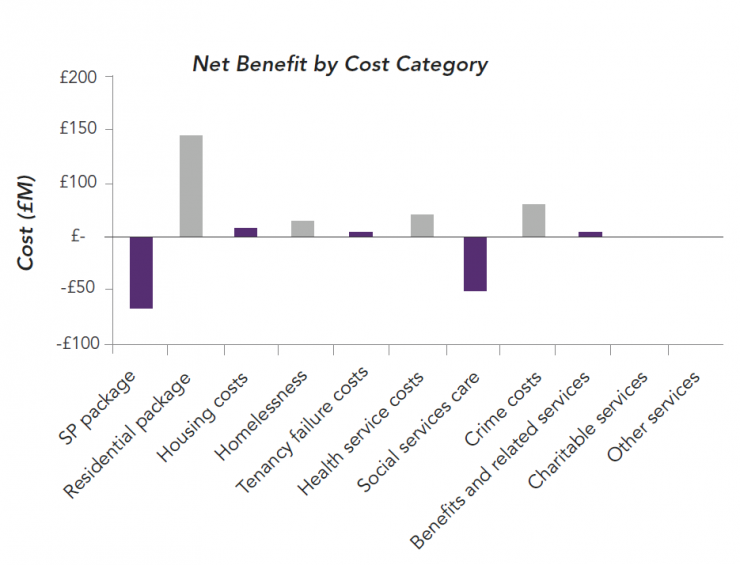 Taking the programme as a whole, the biggest savings are, therefore: