Going, going gone! The advent of the “cashless society” worldwide and how UK-wide and NI-based charities are adapting

In any discussion of the “cashless society”, Sweden deserves a special mention as the nation which is rapidly moving towards becoming the world’s first completely cashless society. According to the central bank of Sweden, the proportion of cash transactions in retail dropped from 40% in 2010 to 13% in 2018, and around half of the country’s retailers predict they will stop accepting bills before 2025****. Many consumers now pay for everyday goods using the country’s main payment app, Swish.

However, the phenomenon seems truly global.

PayPal now offers digital gift cards after finding that over half (52%) of its American consumers “wish they could ask for money, rather than traditional presents”.   In addition, the UN’s World Food Programme’s ‘Share the Meal’ mobile app, allowed supporters to make an on-the-spot ‘micropayment’ of 50 cents to feed a child for a day, simply by tapping on their phone. By August 2019, the total number of shared meals had passed the £42 million mark.

The move away from cash can also be seen in most individual countries.  Just 3 examples are:

Spain – Cuidad BBVA tested an “invisible” payments technology, with employees trialling an app to automate their payments using biometric technologies at the café and restaurants at Cuidad BBVA. Users could order a coffee or book a table through the app, and their order was automatically registered and paid for through their account. In the future, BBVA plans to use facial recognition technology.

Asia - AirAsia’s e-wallet, BigPay, allows users to add up to 10 credit or debit cards to the wallet to top up their balance, protected by fingerprint ID. As well as paying for items on AirAsia flights, users can pay friends and family by scanning QR codes or syncing their contacts with the app.

USA/Korea - Visa introduced Payment Wearables for the Winter Olympic Games and Paralympics, enabling contactless payment for athletes and fans through commemorative stickers, Olympic pins, and gloves with loaded with prepaid amounts of currency.  The aim was seamless purchasing and elimination of the need for cash from both Games.

In 2018, The Foresight Factory’s 2018 global research predicted that within 5 years:

Their research also led them to state that,

“Consumer-facing technology will be key to ensuring that cashless innovations keep up with consumer demand for speed, convenience and control.”

“Charitable donations must become as frictionless as retail purchases.”

For many charities, the starting point in terms of adapting to the “cashless society” has been in facilitating “cashless giving”, i.e. enabling their supporters to donate to them using substitutes for cash (including contactless credit or debit card donations and contactless mobile donations).

Barclaycard research demonstrated that charities in the UK may be missing out on more than £80m in donations each year by only accepting cash donations, as 4 in 10 people (42%) say they carry less cash now than they did 3 years ago.  1 in 7 people (15%) also admit to walking away from a donation opportunity at least once last year because they were unable to give using a debit or credit card.

It is however clear that some charities are ahead of the game in this area and that the UK has seen some innovative work relating to cashless giving.  This includes:

Blue Cross Tap Dogs introduced a new team of furry, four-legged fundraisers, equipped with contactless card technology built into their specially-designed, lightweight jackets. Anyone wishing to donate can simply “pat and tap the dog” to make a standard £2 donation using their contactless payment card – or speak to a human volunteer if they’d like to give a different amount. 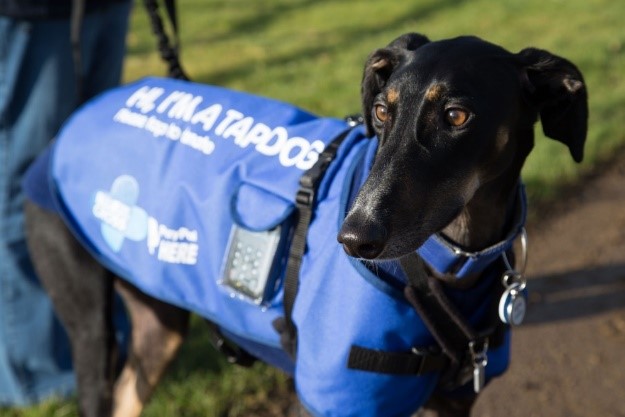 CRUK claimed “the world’s first use of contactless payment on #SmartBenchUK ”. These solar-powered benches “enhance public spaces” by providing mobile device charging ports, free wi-fi access and real-time environmental data including air quality, as well as a place to sit and socialise.  Technology allowed CRUK to also enable the public to also use their contactless debit or credit card on the bench to tap and donate £2 to the cancer charity. 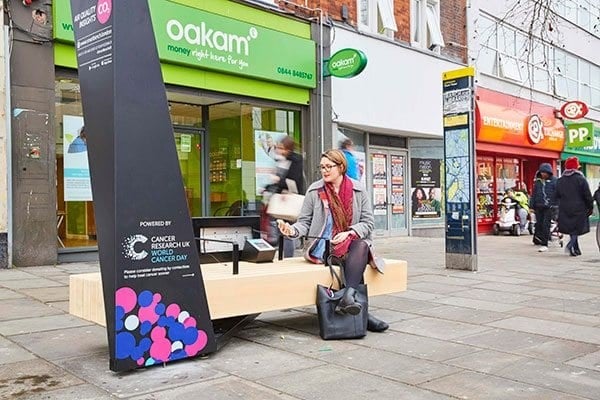 Tŷ Hafan, the only children’s hospice in South Wales, launched its first ever contactless shop window.  The window, located at the front of the Tŷ Hafan store in Cardiff city centre, accepted hundreds of contactless donations by people merely tapping their debit or credit cards on a contactless terminal affixed to the window, donating a fixed fee of £3. The Cardiff store window was compatible with any contactless credit or debit card, and was in use for a total of 16 days. 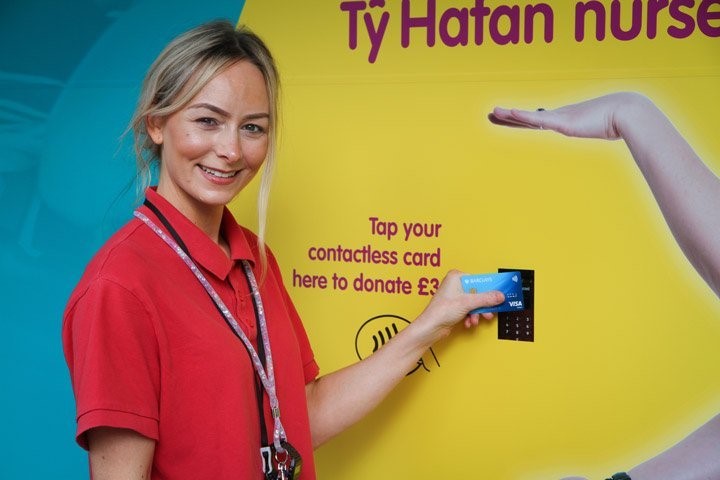 Despite some great UK successes and innovative ideas, back in November 2018 a SCOPE NI article by Nick Garbutt gave an initial flavour of where the majority of the voluntary sector currently stands in the UK.

“A survey published by the Institute of Fundraising in summer 2018 showed that 171 out of 245 member organisations across the UK reported either a significant or slight decrease in cash donations since 2015. It also revealed that 86% of respondents predicted decreases in cash giving over the next 5 years. The remaining 14% presumably live in a parallel universe.”

Against this, just 26% of charities have tried to raise money through contactless systems. Those who haven’t felt that either they “didn’t have the skills” or that they would not use them because they cost money. However, 72% do plan to look at using contactless payment technology in the future, with a similar number saying that they believe such systems offer either a “slight” or “significant opportunity” for fundraisers.

A SCOPE NI article by Ryan Miller included findings by the Institute for Voluntary Action Research (IVAR) and the Centre for Acceleration of Social Technology which found that smaller community and voluntary organisations are willing to embrace the digital world but are constrained by time and funding.  At the same time, Start Somewhere: An Exploratory Study into Making Technology Imaginable and Usable for Small Voluntary Organisations found that 93% of organisations in the UK with annual incomes under £500k think tech can make them more efficient but 54% say they lack the capacity to pursue change.

Lack of funding is still the greatest issue at 56% this year, with skills just behind it at 53%. Culture continues to be a barrier at 45%. And just under a third say that a lack of trustee buy-in is preventing their charity from moving forward.

Both UK-wide and NI-specific funders are increasingly recognising that there is a need to fund charities in terms of digital transformation, with a myriad of grant schemes no available.

Three such grant schemes are -

2) The UK-wide tt-exchange programme  (formerly CTXchange Programme) which enables eligible charities to gain access to over 140 donated technology products from partners such as Microsoft, Symantec and Cisco.

3) The NI-specific Techies in Residence Programme originally designed by Building Change Trust has supported 19 innovative projects across NI since it was launched in 2015. It sees VCSE organisations matched with tech professionals to help them solve a social challenge using digital technology.

Looking closer to home, NICVA’s 2019 Individual Giving Survey shows that donations in NI have fallen since 2017 but that digital giving through electronic means appears to be becoming ever more popular.

While almost three quarters (73%) of respondents used cash as their main method of donating, nearly a third (29%) said they used digital means to donate to charity.

Furthermore, almost 1 in 5 (19%) indicated that they would be likely to donate more money if given the option to make one-off contactless payments.

“Looking to the future, this survey highlights the need for charities to keep up with new technologies and trends to sustain support for their vital work in a difficult climate.” (NICVA’s Head of Policy and Public Affairs, Geoff Nuttall) According to the Spring 2019 Ulster Bank and CO3 3rd Sector Index, which surveyed the directors and CEOs of organisations such as charities and social enterprises, there is a strong belief in the sector that digital adoption is important, with 62% of respondents agreeing that this can make the third sector more resilient and sustainable. And 40% anticipate that technology will have a significant impact on their organisation in the 5 years ahead.

However, 94% of third sector leaders responding said that their organisation faces barriers to fully accessing technology due to factors including cost and a lack of appropriate skills. Only 28% believe that technology has significantly changed their organisation over the last five years.

“The latest report shows that demand for the services third sector organisations in Northern Ireland offer continues to increase at the same time as funding pressures mount. Organisations recognise that technology can help them deal with this difficult situation and it is extremely important that digital transformation continues in the third sector over the years ahead.” (Nora Smith, Chief Executive of CO3)

According to the survey, NI’s voluntary sector overall is lagging behind in terms of digital transformation and this is impacting on its ability to remain competitive and deliver services.

However, since even in the rest of the UK the pace of change is sluggish, the situation is best summed up thus -

“Broadly speaking Northern Ireland finds itself at the back of a slow race.” (Ryan Miller, Scope NI)

NICVA believes that more support for the sector is required. If the appetite for using contactless payment technology is in place, the key stumbling blocks that remain relate to cost and capacity.  If we as a sector can pool our resources and share our skills and knowledge, more NI organisations will be better able to capitalise on the “cashless society” speeding towards us, rather than being “run over” by it.  However, this work also needs to be fully backed up with additional funding, coupled with a concerted effort to address any skills deficit which may be preventing NI organisations from fully reaping the benefits of embracing "cashless giving".

With grateful thanks for contributions from Kevin McCaughan (Advantage Solutions), Heather Miller, (Community Fundraiser, Marie Curie) and Denny Elliott, (Redsocks Consulting) for all their contributions.