How will Brexit impact the ethnic minority sector?

This session had great line up of speakers who were able to bring home what Brexit could mean for those EU nationals who live, work and study in Northern Ireland.

Prof. David Phinnemore from Queen’s University Belfast started the session off by giving an overview of the state of play in the Brexit process highlighting that the UK and the EU are yet to agree the terms of the withdrawal agreement (it was previously hoped that these would be agreed for the October EU leaders meeting). Even when (if) a withdrawal deal is reached between the UK government and the EU27, there is still the mammoth task of getting it through the parliament in Westminster. If (and that’s a big IF) all goes to plan, the UK will leave the EU in March 2019 and enter into a transition period until December 2020 during which the UK will remain on the same terms as an EU Member State but with no seat at the table of the EU institutions and the future terms of the relationship between the UK and the EU, after the transition ends, will be negotiated.

The below diagram highlights where the negotiations are now at (phase two), with the Irish dimension - in particular finding a workable solution to avoiding a hard border - being one of the main barriers to agreement on a withdrawal deal and still only ‘limited progress’ being made to date. 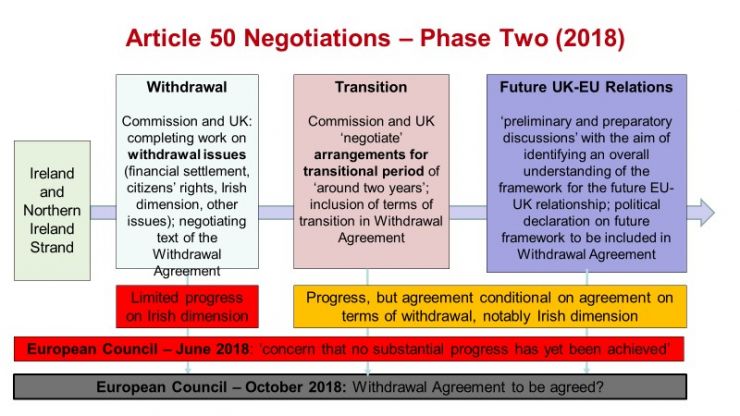 There is a real chance that even if Theresa May does get a deal agreed with the EU27, the numbers for getting it endorsed through the UK parliament may not be sufficient, given poor Tory backbench support (both from hard Brexiteers and those seeking a softer Brexit than the Chequers proposals); Labour’s specific requirements for supporting a deal (essentially remaining in a customs union and single market); and uncertain DUP support. Considering the latest that a deal can be ratified in the UK parliament is January 2019, time is not on the UK government’s side!

Update from the Law Centre NI on Settlement Scheme

Elizabeth Griffith from the Law Centre NI provided an update on the situation for EU nationals here, and on the EU settlement scheme under which non-UK or Irish EU nationals and their families will be able to apply for ‘settled status’ and be allowed to continue to live in the UK. It was explained that the information on the settlement scheme applies in the context of there being a deal, however Theresa May has given an assurance that this will go ahead even if there is a ‘no deal’. In the current situation for EU nationals, those who have had 5 years exercising treaty rights (e.g. rights to work, study) could apply for permanent residence. In the new scheme, those EU nationals who have had 5 continuous years of residence in the UK can apply for settled status.

It was highlighted that there are currently EU nationals who had previously not been able to exercise treaty rights, but who have lived in the UK for 5 years or more and will be able to obtain settled status under this scheme - however it is still to be clarified if they will have the same rights as before.

Who is eligible to apply for settled status?

What is the application process?

What do EU nationals need to do at the moment?

Concerns raised about the scheme

Ola Sobieraj from the Stronger Together network provided an overview of reflections and concerns from ethnic minority communities and the BME sector. She highlighted that the Leave vote was a ‘big bang’ moment for the ethnic minority sector with a perceived change of attitudes, increased hostility, racist hate crime and violence. There have been increased feelings of fear and lack of security for those citizens living here who feel as if they have becoming a bargaining chip in the negotiations and there is a lack of representation for these communities.

Brexit concerns from the ethnic minority sector include:

It was highlighted that although there are some great organisations working to provide advice and assistance to EU nationals, there is a need for much more to reach those people on the ground and in communities who may not yet know or understand fully what the scheme means for them or what actions they will need to take to comply.

The session finished up with a roundtable discussion to further explore what the main Brexit concerns for the ethnic minority sector here were and possible support that could be provided. The notes from this discussion as well as all of the presentations and further information are attached.