Maghaberry – pulling together through Covid 19

According to Tracey, it was clear from the start that the best way to address local need was for various local groups to work together. She says: “the local response was not just from ourselves but also from the Churches, the shops, sporting groups, everyone together”. This co-operation even happened beyond the local community, with Maghaberry response team working with others in surrounding areas, sharing information on grants with each other, and planning coverage of different geographical areas to avoid gaps and overlaps.

The needs created by COVID 19 were not entirely as initially expected in Maghaberry itself. Tracey says: “At the start we thought that mainly the older generation would need support for example with food packages etc. but we found it was more families who needed support. It’s a working village, and a lot of people commute. Some families had both parents on furlough or out of work and needed food. Older people needed support too – and this wasn’t always linked to income. Even those who had the money for food couldn’t get out to buy it”.

This meant that for Maghaberry COVID 19 Response, the priority was food distribution. The group worked with the Trussell Trust, a charity whose aim is to stop UK hunger and poverty. This enabled them to make food deliveries to local people.

They also delivered the Department for Communities Food Boxes locally on behalf of the Lisburn and Castlereagh Council City Council. They discovered that the food boxes sometimes contained products that older members of the community were less likely to eat such as pasta. They asked local people to identify others who they felt might need assistance, with the individual’s agreement of course. 40-60 customised food packages were delivered per week in addition to the DfC food boxes.

It was brought to the group’s attention that an older lady in the village required gluten free food – so volunteers made a point of putting together a gluten-free food pack. The lady was delighted, and sent a card thanking them very much for thinking of her. This all meant that the group were able to ensure that people received food that they would and could eat, and it also meant that older people were having a regular check-in from the volunteer delivering the food package, helping to keep them connected and reduce isolation. For Tracey, the value of this is summed up by an unexpected gesture from a local resident – Tracey says: “One wee man phones up and sings a wee song down the phone to say thank-you! It’s just the thought that someone is thinking about him that he appreciates”.

Keeping Spirits up with Teddy Bears!

A local woman, Linda Allen, started the Maghaberry Lockdown Bears initiative, as a way of keeping spirits up during lockdown. She created Teddy Bear displays in her garden, and this encouraged other people to join in and do the same. The feedback has been that children have loved the lockdown bears – they brought a little fun to lockdown.

Tracey feels that the sheer volume of local people volunteering shows what a caring community Maghaberry is: “We had more volunteers than we needed” says Tracey “we had 80 – 90 volunteers all taking on different roles – delivery, bag filling etc.” She goes on to say: “we noticed that where a family received support, a member of that same family would then come forward to offer their help”. According to Tracey, the younger generation stepped up to the mark too. Because at least 50% of the normal volunteer group are pension age, and some were shielding, younger members of the community came forward. Local volunteers made over 2000 masks, scrubs and scrub bags. Ladies at the Church Knitting Group made “hearts for hospital” – this was for anyone in hospital – the patient receives a heart and the family receives one too – the idea being to help people to still feel connected to their family and supported. They also made rainbow keyrings for nurses.

What does the future hold?

Tracey feels sure that the the focus will now shift to mental health and overall wellbeing: “the main thing now is to keep people focused and keep spirits up as demand for food support decreases” she says. For Mental Health Week, the group made up packs of snacks and treats and provided information on keeping healthy, including heart health and mental health. They plan to provide “Join your neighbour for a cuppa” packs, containing tea, scones, jam etc. to encourage people to connect safely with neighbours where appropriate.

Tracey is also positive about the impact on how people get involved in their community going forward. For example, she has a number of older ladies who are now keen to join groups once the crisis has passed – people who had never joined groups before. Her view is: “this is because people can now see that working together is so much better than working on your own”.

What keeps you going?

For Tracey, the answer is simple: “I just love where I live – that’s it for me and the volunteers just love where they live too – Maghaberry genuinely pulls together when they need to – ask anyone”. 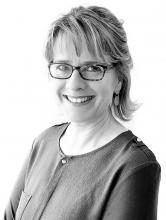