Since 2017 all fundraising in NI has come under the remit of the Fundraising Regulator and its Code of Fundraising Practice. This article looks at what this means in practice.

What is the Fundraising Regulator?

Does it apply to your organisation?

In 2017 the NI voluntary sector, after a 9-month consultation exercise facilitated by NICVA, chose to be governed by the existing Fundraising Regulator rather than set up its own, home-grown fundraising regulation system. Northern Ireland is now also represented on the Board of the new Fundraising Regulator in the form of Walter Rader, well known to many here from his time as the Big Lottery Fund’s NI Director and his work in helping set up the Charity Commission.  In September 2019, Joanne McDowell then joined Walter in NI as the Fundraising Regulator's new NI Manager.

The Fundraising regulator now regulates all fundraising by or on behalf of* charitable, philanthropic and benevolent organisations in England, Wales and Northern Ireland, including:

*Where fundraising is carried out in aid of an organisation, but without the organisation's permission, they will assess on a case-by-case basis whether any responsibility can reasonably be assigned to the charity in respect of the activity concerned.

What is its role?

Its role is to stand up for best practice in fundraising, with the dual purpose of both protecting donors and supporting the vital work of fundraisers.  It works in partnership with other regulators and representative bodies in the charitable and fundraising sectors to build public confidence and ensure consistent fundraising standards across the UK.

It does this through:

Is there a cost for your organisation?

The Fundraising Regulator is funded through a voluntary Levy on charities SPENDING £100,000 or more each year ON FUNDRAISING.

The number of charities in Northern Ireland liable to pay the Levy is very low in comparison to the 2000 charities in England and Wales: approximately only around 25 charities in NI are expected to pay any Levy.

In September 2018 changes were made to the Levy in order to increase the annual budget for the Fundraising Regulator to an estimated £2.2m. This was the minimum that had been set out in the cross party review of fundraising which led to their being set up, and also the amount they have always said they needed to operate effectively.  Having considered various options, the option chosen was the one believed to have the least impact on charities, and the one that is the fairest.

The extra funds will help them to do more public research, more proactive work and to increase public awareness of the regulator.

Under the new Levy arrangements the Fundraising Regulator will:

Larger higher education institutions and arm’s-length bodies will continue to pay a flat rate levy of £1,000. Registration for charities below the levy amount will remain at £50 per year. The costs of registration for non-charities will also stay the same.

The new Bands are as below - 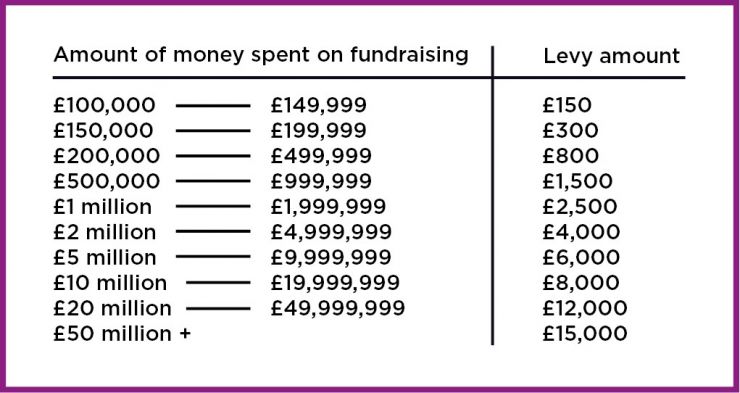 However, the Fundraising Regulator also invites charities spending less than £100,000 a year on fundraising to register with it – for an annual fee of £50.  This allows organisations to publicly demonstrate their commitment to ethical fundraising. Non-charities, commercial fundraising businesses and Community Interest Companies (CICs) can also register.

To view the Directory of registered organisations click here

What is the Fundraising Preference Service?

People can choose to stop receiving emails, telephone calls, addressed post and/or text messages from a selected charity or charities.  Any charitable organisation, higher education institution, museum or gallery can be identified on the Fundraising Preference Service.  It is worth noting that 20% of the suppressions in the first few months were made on behalf of other people:  this demonstrates that it may be an invaluable resource in protecting the more vulnerable from unwanted direct marketing from charities.

What is the Code of Fundraising Practice?

After extensive consultation in Autumn 2018, the Fundraising Regulator revised the Code in Spring 2019 to make it clearer and easier to access. The changes are designed to make it simpler for fundraisers, charities and third-party organisations to understand the standards expected of them when fundraising. The new code is also easier for the public to navigate, so that they know what to expect from ethical fundraising.

The new Code became available in pdf format in June 2019 in order to allow organisations to become familiar with it before its official launch in Autumn 2019.  Key changes to the code include -

In addition to a new, more detailed Introduction and helpful Glossary, the revised Code is now in three, easier to access sections -

Part 1: Standards which apply to all fundraising

2) Responsibilities of charitable institutions  and those who govern them

Part 2:  Standards which apply to working with others

8. Collecting money or other property

13. Grant-making bodies (including trusts and foundations)

How do I implement the Code?

Following the Code and continuing to commit to good practice in fundraising is far and away the best means of ensuring that public confidence remains at the extremely high level evidenced in the Charity Commission for Northern Ireland’s Public Trust and Confidence in Charities 2016 research.  The 4 Key Principles are those to which the vast majority of NI fundraisers already aim to adhere, i.e. their fundraising is Legal, Open, Honest and Respectful.

The easiest way to use the Code is to read the introduction to understand the context in which it sits, followed by Part 1, i.e. the standards which apply to all fundraising.

Part 2 then needs to be read by those organisations whose fundraising involves working with volunteers, children or professional fundraisers and/or commercial  participators and partners.

Finally, Part 3 of the Code reflects the reality that not all types of fundraising activities are carried out by all organisations.  For this reason, you can simply check the relevant section of Part 3 of the Code each time you plan a specific fundraising activity.  This will ensure that everything you do within this particular activity is then in keeping with the standards laid down in the Code.