The Fiscal Implications of an Older Population in Northern Ireland

This research aims to identify the fiscal impact of the changing age profile of Northern Ireland.

The research compares this expenditure with revenue to show the overall fiscal balance. This revenue accounts for 70% of the total revenue attributable to Northern Ireland (the main omissions are: a proportion of VAT, stamp duty, business rates, and corporation, inheritance and capital gains taxes).

The research does not take into account indirect financial contributions made by the population through, for example, volunteering. Instead it focuses on what is recorded by government in its fiscal balance sheet.

You can find the data from this research on the Detail Data Portal.

The research takes these components of expenditure and revenue in Northern Ireland and shows how they vary by age. Figure 1.1 summarises the outcome of this analysis. The negative bars (grey, blue and green) show the average annual expenditure per person in each age group and the positive bars (red) show average tax revenue. The line shows the overall balance between expenditure and tax. The graph shows that:

Figure 1.1: Average amount paid in tax and received in services and benefits per person per year in Northern Ireland 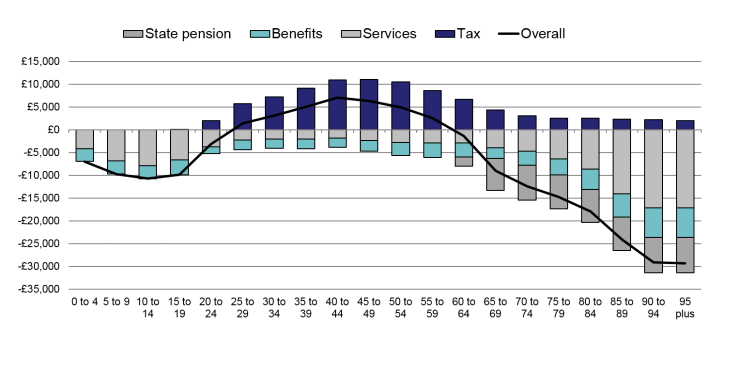 Source: NPI Population Tax and Expenditure model. The data is for 2015.

These components of expenditure in Northern Ireland in 2015 are estimated to amount to £15bn, compared to £9.6bn in estimated revenue. This means that revenue accounts for 64% of expenditure and leaves a shortfall of £5.4bn.

To show the impact of the change in the population age structure the research applies the age-based expenditure and revenue pattern in 2015 to the projected population in Northern Ireland in 2045.

This kind of analysis relies on a number of assumptions and should not be seen as a forecast of the future fiscal balance. It is instead an analytical exercise to show the impact of the changing population age structure on the public finances.

The main output of the analysis is an estimate of overall expenditure and revenue in 2045 under a range of different scenarios. The “baseline” scenario assumes that the only change is the age structure of the population, whilst the other scenarios look at the impact of additional changes. These include:

Table 1.2 summarises the results of the analysis. It shows total expenditure, total tax, the shortfall between the two and the percentage of expenditure covered by tax.

In 2015 tax revenues cover 64% of modelled costs leaving a £5.4bn deficit. By 2045 this would change to 51% or a £9.6bn deficit if the population change was the only factor and economic growth was zero. This increase in the deficit of 13 percentage
points can be taken as a measure of the fiscal effects of the ageing population.

To allow for economic growth the model draws on the assumptions used by the Office for Budget Responsibility, with inflation at 2% per annum and economic growth and earnings increasing at 4.2% per annum. It also assumes that spending on state pension and social security benefits increase at the same rate as earnings.

The table shows that with economic growth the overall deficit increases to £18.3bn in real terms but tax as a proportion of expenditure remains at 51%. In the absence of changes that affect the balance between tax and spending, the total size of the deficit also grows but the proportional shortfall is unchanged. This scenario is taken as the baseline against which subsequent variations are compared.

1.  One way to reduce the level of expenditure relative to tax would be to uprate the value of state pension and social security benefits by less than earnings. Variation 1 in the table shows how the fiscal balance would change if both were uprated in line with inflation. This would mean that tax would account for 67% of expenditure, higher than the level in 2015, and more than countering the impact of the altered age structure. Currently, the value of state pension has been subject to the ʻtriple lockʼ(i.e. increase each year by at least as much as earnings) whilst for most other benefits the increase has been 8 capped at 1% per year since April 2013. At the time of writing the triple lock on pensions is guaranteed until 2017 whilst other benefits will be uprated by 1% until April 2016. It is important to note that this consideration excludes possible negative fiscal impacts of higher poverty levels and lower living standards that are the likely result of uprating pensions and benefits by a lower rate.

2.  The baseline scenario assumes that there is no change in public sector productivity between 2015 and 2045. But if it increased, the same services could be delivered at lower cost. Public sector productivity is hard to measure but research suggests that an improvement of about 0.7% a year has been achieved in the past. If it increased at 1% per year, expenditure in 2045 would be £5bn lower for the same level of service provided. Whilst this may be an optimistic scenario even small gains in productivity could reap significant fiscal rewards.

3.  The state pension is already legislated to increase to 67 by 2028 and by 2045 it is expected to be 68. This change would have a direct impact on expenditure by reducing the number of people eligible for state pension. But it is also likely to increase tax revenues as an estimated 73,000 adults over 50 respond to the change by remaining in work for longer. This could potentially increase tax revenues from the 2045 baseline by £1.4bn and reduce expenditure by £1.2bn. As a result, tax would account for 57% of expenditure. This change in the SPA is not included in the baseline as, although a reduction in State Pension spending is guaranteed, the impact on employment is uncertain. However, this scenario does present a more realistic picture of
the fiscal trajectory than the baseline.

4.  There is also reason to expect the employment rate of people over SPA to increase beyond the baseline, even if the SPA did not change. Despite the financial crisis and the overall increase in unemployment in Northern Ireland the employment rates of those aged 65+ have continued to increase. A considerable increase in the employment rate among people aged 65 and over from 7.7% in 2015 to 31.1% in 2045 (resulting in an extra 77,000 in work) would raise an additional £1.0bn in tax, at which point tax would account for 54% of expenditure.

5.  The final scenario shows what could happen if the gradual improvement in life expectancy led to improved health outcomes and therefore a reduced need for health-related spending. To model the effects, it assumes that the health of someone aged 45 and over in 2045 is like that of someone slightly younger in 2015. This would reduce expenditure by £2bn so tax would account for 54% of expenditure. But whilst the Office for National Statistics forecast total life expectancy to increase by 5 ears by 2045, it does not forecast healthy life expectancy as trends are less clear.

In 2015 there is a considerable shortfall between the tax and expenditure modelled in this research – with tax accounting for 64% of expenditure. If this current tax and expenditure trend was applied to the population of 2045 it would be 51% due to the change in the age structure.

But by 2045 a number of other changes are likely to alter the situation so the impact on the fiscal balance would be smaller. These include:

Other than the change in the state pension age which is already legislated (and may increase further in the future), all of the above are probable but not inevitable. For these changes to be achieved some kind of intervention would be required.

•  At present Northern Ireland has high levels of inactivity and employment rates that fall at an early age. The Northern Ireland Executive already has plans to reduce inactivity. Meanwhile the employment rate among people over SPA has consistently increased in recent years, despite the recession. But research has warned that this increase will not continue without investment in learning and development among older workers and greater provision for flexible working and phased retirement.

•  Given recent trends, it is reasonable to expect that healthy life expectancy will increase and, as a result, the required health expenditure on older people could fall. However, the extent to which it does improve is difficult to predict. What is clear is that improvements in healthy life expectancy in Northern Ireland are lagging behind GB. A shift in this trend would be good for the wellbeing of the population but would also lead to considerable improvements in the outlook for the public finances.

•  In terms of increased public sector productivity, the health and care sector provides a bespoke service to individuals according to need and it requires skill, sensitivity and time. Making such services more efficient without compromising on quality will be a challenge. Investment in public health which aims to both increase service productivity and increase healthy life expectancy would benefit individuals in terms of overall wellbeing but also bring about long-term savings.

If all of these were achieved, they would more than counter the fiscal impact of the shifting age structure. These three aims of increased employment (especially among older people), improved health (specifically targeting the onset of ill-health in later life) and increased public service productivity should not be seen as solely economic or financial goals, but social ones requiring changed norms and greater participation from all sections of Northern Irelandʼs society.

Although it is common sense that an ageing population will increase net public spending, this research shows that the fiscal effect, though large, does not dwarf other changes that could offset it. Holding down public sector earnings and social security benefits continually for decades is one of them. But this is a harsh response to the increase in life expectancy which in itself is a wonderful thing. Alternatively, a combination of higher employment among those aged 50+, increased healthy life expectancy and public services delivered more productively represents a viable alternative to endless austerity.