This is an informal group set up specifically to deal with the Covid 19 situation. It involves volunteers from the local community with support from local community groups and churches. The objective of the group was very clear from the first meeting: to offer practical support to any potentially vulnerable neighbours or older people who may experience difficulties during the pandemic. It mostly covers the BT8 area including Carryduff, Newtownbreda and Four Winds. Michelle Guy, a founder member of the group, talked to NICVA’s Helen McLaughlin about the group’s experience. Michelle is a councillor at Lisburn and Castlereagh City Council, but was keen to get involved as a local resident.

Why was the group set up?

The group emerged because a number of local people had put a call out asking what was going on and how they might help. As Michelle says: “a few different people in the area had stepped forward to volunteer to assist elderly, vulnerable or isolating neighbours. Local Scout leader, Paula Conway took the initiative to try and join the dots by holding a community meeting to form a more coherent response. It was at this meeting the BT8 Coronavirus Community Outreach Group was founded. The dominant theme at this initial meeting was concern that elderly and vulnerable people who needed to stay indoors could fall through the net, especially if they had no family nearby. The worry was that they might feel they need to go out and put themselves at risk”.

The organising group was made up of a range of people including those working in health, pharmacy etc. and who understood the issues presented by the virus. The group felt that the best approach was to use a structured and targeted approach in order to cover all areas. Paula Bradshaw MLA provided maps of the area which had formerly been used in canvassing – this provided an automatic neighbourhood structure which enabled the group to plan support at a street by street level. People registered to volunteer via a Facebook page set up by resident Maggie Hunt. A team leader was designated for each area, with volunteers matched up to the street or area they were nearest to thanks to local pharmacist Julia Toland. Michelle notes: “Julia put in an incredible effort to log hundreds of volunteers in the initial weeks in a fantastic spreadsheet, all whilst juggling her job as a pharmacist! Everyone in the group was so grateful for her unbelievable efforts in those initial weeks, especially given how busy her day job was.”

In the early days, the main tasks were delivering leaflets to make sure residents knew about the group. As volunteers became established within their neighbourhoods, the tasks were mostly grocery and prescription deliveries to people in need. The group linked up with local retailers such as The Four Winds MACE, Carryduff Spar, Thorndale Vivo and Brackenvale amongst others who started to offer a phone ordering service enabling payment by phone so that no money exchanged hands. 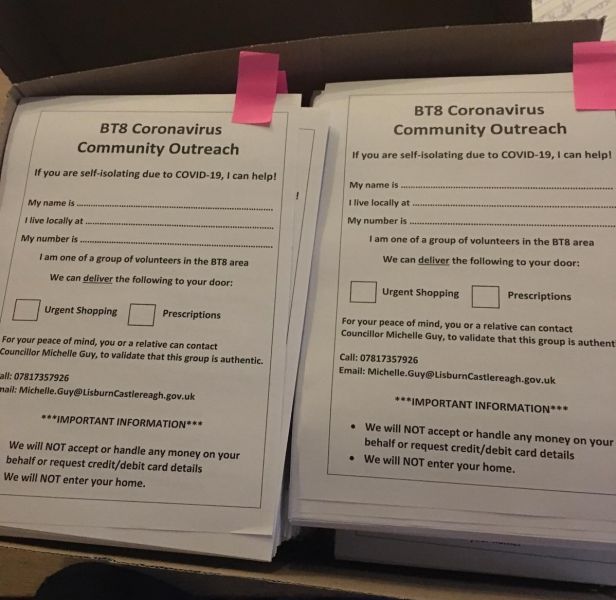 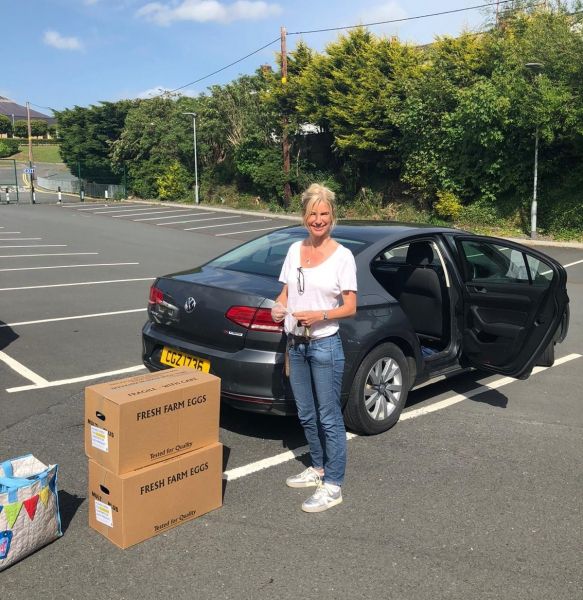 Later into lockdown the group became involved in the delivery of food parcels and ready-prepared meals. Volunteer Aine Loughran, who was instrumental to the formation of the BT8 group, led the food delivery effort and coordinated a fantastic group of volunteer delivery drivers. Aine liaised with Lisburn and Castlereagh Council officers, as well as forming links with other groups in the area such as the Killynure Community Association and Newtownbreda Baptist Church to deliver weekly food parcels and freshly prepared meals to vulnerable residents. The meals, provided free of charge to the group, were prepared by Café Carberry based in Victoria Street in Belfast and Four Winds based fish and chip shop Cod & Cow. 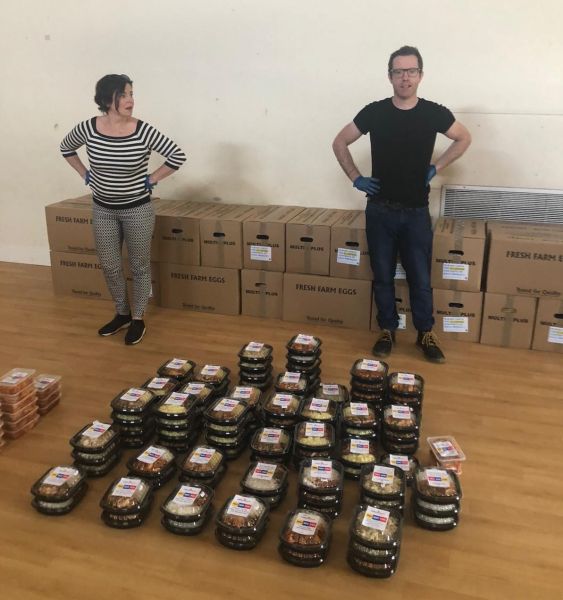 The group also incorporated an element of checking in with people using phone calls. This enabled volunteers to identify if someone was feeling down or lonely. On Easter Sunday local churches put a message out to let the local community know that the group was there and stressed the importance of using the group for deliveries if shielding or vulnerable rather than taking the risk of going out.

Michelle feels that the effort was a success because of all the different individuals, groups, organisations and businesses who came together: “There has been great collaborative working and in particular I have to thank the Carryduff Regeneration Forum (CRF) for its support. CRF Committee members generously contributed knowledge and experience of community organising which was a great help to the BT8 Group”. She recalls initial meetings of the group: “People just got around the table and asked what can we do? A smart and focused plan to reach as many people as possible was developed and rolled out within a 2 week window – including designing, printing and delivering over 4,000 leaflets. It was an incredible effort! The group signed up about 350 volunteers, who all provided GDPR consent and embraced a strict doorstep protocol to protect residents and volunteers from infection. It was such a slick operation I was able to share the blue-print for the BT8 group with a neighbouring group that formed in the Rosetta area. The community spirit that manifest at this time was simply wonderful, with volunteers hungry to contribute in any way they could”.

Feedback to the group suggests that for local people, the support provided has been a lifeline. One older lady had been looking forward to celebrating the end of a course of radiotherapy treatment with friends, before the crisis set in. She was heartbroken to be isolated at such a meaningful time. The group connected her with a volunteer who, along with a trusted neighbour, were able to reach out and ensure she felt supported. Michelle recalled one particularly heart-warming conversation: “Given her circumstances having just completed cancer treatment, I checked in with her - she is so great to chat to! On one occasion she told me that her neighbour’s daughter had delivered her a hand-written letter, telling her that she missed having wee chats and looked forward to catching up after lockdown. This small gesture meant the world to her and as well as being a boost at the time, it gave her something to look forward to.”

What about the future?

According to Michelle, the need for deliveries has now tailed off and the decision has been taken to do a second round of support if there is a second wave and subsequent lockdown. However, members of the group are aware of issues which could arise as lockdown now relaxes, including mental health issues. One member of the group, Maggie Hunt, a Consultant Child Psychiatrist, provided invaluable insights and advice throughout whilst also working on the frontline of the crisis. Through her job, she was alert to the mental health challenges coming down the line. In response she proactively worked with mental health charity AWARE to put together an activity kit to enable children in the area to describe their experiences of the crisis. Volunteers have also been encouraged to join the PSNI’s Trusted Neighbour Scheme as a way of staying in contact with the people they supported during lockdown.

What’s your inspiration to keep going?

Asked what keeps her motivated, Michelle is keen to point out that this was a joined up effort by the whole community, but in terms of what keeps her going she says: “As a local councillor, this is what I signed up for – to roll my sleeves up and help in my community. It was an absolute privilege to help, but I really was one individual in a team. Witnessing how our community came together during this crisis and meeting so many amazing people was genuinely inspiring.  If the group is needed to jump into action again, it’s great to know we already have a fantastic network ready to mobilise.”